On October 27, 1966, just a few months before his death, Walt Disney recorded a 25-minute film in which he laid out a grand plan for the 27,000 acres his company had recently purchased in central Florida. Speculation had been rampant, but this “Florida Film” was the first time Disney showed his hand. It was here that he detailed plans for what would become the Magic Kingdom and, eventually, Walt Disney World Resort, but this was far from the film’s focus. Instead, Disney was proposing an Experimental Prototype Community Of Tomorrow. EPCOT, as it would be called, would be a city of 20,000, drawing on the “new ideas and new technologies” of American industry.

The Epcot Center, which opened in 1981 and remains in operation, is not this city. Only now are governments, companies, and people around the world beginning to build communities as forward thinking as EPCOT was in 1966. As the foundations of today’s smart cities are laid, we should take a moment to ask what Walt Disney’s vision can tell us about our future.

In 1965, Disneyland was a massive success, so much so that Columbia, Maryland planner James W. Rouse described it as “the greatest piece of urban design in the United States.” While the California park boomed, Disney had secretly purchased thousands of acres of swamp in central Florida – an area more than 300 times that of Disneyland. In November, Walt Disney and his brother, Roy (not to be confused with Roy E. Disney, his son and later a Disney executive), joined Florida Governor Haydon Burns at a press conference to announce the “Florida Project.” Walt Disney described it as “the biggest thing we’ve ever tackled,” but didn’t provide details. He didn’t record the “Florida Film,” until October 1966 and it wasn’t screened until April 1967, four months after his death.

The “Florida Film” provides the best and clearest definition of what Disney wanted for the property. Certainly, a theme park would be present – tucked at the very north end of the 12-mile-long site. With all of its hotels and recreation services, it would cover an area five times that of Disneyland but still occupy only a tiny portion of the land. At the far south end of the plan, an “airport of the future” and an entrance complex would welcome visitors. From there, a monorail system would extend the full 12 miles.

The next stop on the monorail was a proposed thousand-acre industrial park. Here, Disney wanted to promote commerce and innovation. The park would have been home to research and development for all sorts of American companies and Disney hoped that, as visitors passed through, they might see ideas they could take home to use and expand upon.

But just seeing technology in development was not enough for Disney. He wanted to solve the problems of American cities. The best way to do that, he believed, was to build his own, perfect, city. It would be a testing ground for new technology, a showcase for visitors from across America and around the world, and a home to 20,000. This Experimental Prototype Community Of Tomorrow, he thought, would revolutionize how urban areas work.

Physically, EPCOT would be like nothing seen before, combining the radial plan and concepts of Ebenezer Howard’s Garden Cities, the convenience of modern cities, and Disney’s philosophy of attraction, beauty, and joy. 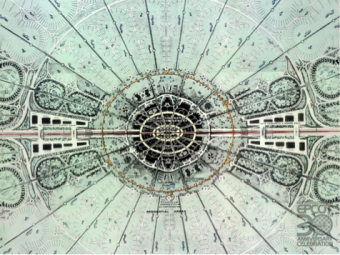 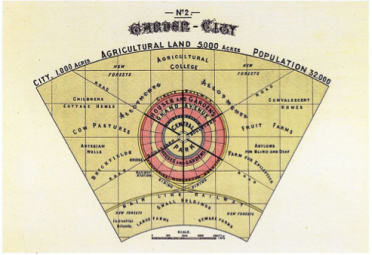 At the very center, similar to Sleeping Beauty’s Castle in Disneyland, would be a hotel with more than 30 stories and a convention center. Surrounding this would be an enclosed internationally themed town center, in certain ways resembling today’s mega-malls. A “country” in this center would occupy almost a city block, filled with themed restaurants, shops, and attractions. This international ring lives on in the World Showcase at Epcot Center.

Beneath the town center would be a key component of EPCOT’s design: the transportation hub. Transportation was perhaps Disney’s greatest focus in the project. In the hub, townsfolk and visitors would catch the monorail to the theme park or the airport, or board the intra-city transport: the WEDway PeopleMover. The WEDway now exists, on a much smaller scale, at Disneyland and the Houston Airport. No one would drive in EPCOT. In fact, delivery trucks and any other automobiles that needed to enter the city were exclusively kept underground, in tunnels. In this, Disney predicted such car-free communities as Masdar City in Abu Dhabi and similar projects in existing cities. Through a unique public transit system and a complex underground infrastructure, Disney replaced automobiles.

Moving out from the town center, Disney planned a ring of high-density apartments for rent at reasonable local rates, followed by a large greenbelt. Similar to Howard’s Garden Cities, this wide strip of greenery would include parks, schools, and churches. The outer ring would be comprised of neighborhoods of single-family houses, built as great petals extending from the city center. These homes were also to be rented at reasonable rates. Besides WEDway stations, the petals would have more parks, green areas, and walking paths.

EPCOT’s homes and other structures would be built using novel styles, materials, and technologies, reminiscent of the Monsanto House of the Future at Disneyland. The Monsanto House, however, was eventually retired as reality surpassed it. This was a major component of EPCOT: today would never surpass its tomorrow. Homes would be prefabricated and modular so materials and technologies could be tested as soon as they were available – hence the “state of becoming.”

This was at the core of the complex and layered EPCOT philosophy: it would “never be completed,” Disney said. As partner companies in the industrial park churned out new technology, from AT&T’s communication equipment to RCA’s electronic goods to Monsanto’s agricultural developments, it would be implemented in the homes, workplaces, and lives of residents.

More important than the residents, though, were the tourists. EPCOT wasn’t just a city; it was to be a showcase. Disney hoped that visitors would learn or see something that they could take to their own towns.

The companies involved also benefited. Imagineer Marty Sklar said Disney “would ask [corporations] ‘When can I buy something with this technology?’ and quite often they would say, ‘We don’t know if the public is interested in this.’” EPCOT was designed to create demand for new technologies. With free advertisement of its newest creations in use at one of the world’s greatest tourist attractions, no company could go wrong.

Unless, of course, they could. If Disney had gotten his way, many competing companies would be involved. All of these corporations had secrets and projects they would not want on display, especially next to those of their competitors. Computers were just beginning to grow and the space race was booming. Trade secrets were becoming more and more valuable.

There also was the matter of privacy. Would people really want to live in a city where their entire lives would be on display to a constant stream of gawking tourists? And where, at any moment, the corporation owning your home could “update” entire sections of it?

These concerns, as well as the economic, social, and political worries of the Disney board of directors (How do you make money off a city? How do you keep complete control over it without subverting the democratic rights of its people?) ultimately led to the demise of the EPCOT project after Disney’s death. Roy Disney fought to keep the dream alive, making deals with US Steel, RCA, and Aerojet, but after his death in 1971 the plan was downgraded and finally all but scrapped in 1974.

In 1975, The Walt Disney Company announced the Epcot Center as a home to some of its founder’s ideas, if not a full community. Management team member Card Walker said it would act as “a forum for the future.” Industry sponsorships in the Future World pavilion and international representation in the World Showcase echo a few aspects, but it lacks certain key EPCOT components: it is hardly experimental, barely a prototype, and definitely not a community. However, Disney’s widow said, at Epcot Center’s opening, “He would have loved it.” Similarly, his daughter said, “I can’t see how he would have done it differently.” Perhaps, even if Disney had survived, EPCOT would have evolved to the theme park we see today.

Eventually, however, the Walt Disney Company did build a community in Florida.

In 1996, development began on what could be considered the last vestige of EPCOT: Celebration, Florida. Celebration finally closed the loop and brought the last piece of Walt’s dream to Florida. Although it proclaims a dedication to technology, education, health, and community, the neo-urbanist city is closer to yesterday than tomorrow.

The spirit of EPCOT has been watered down and divided between a theme park and an old-fashioned city, and we can only wonder what we might have today had Disney lived to bear his dream out to its fullest. Would it have sensors throughout, perhaps even an Array Of Things? How would data be gathered, displayed, and used to improve people’s lives? Would Disney have allowed entrepreneurship and start-up businesses? What would it be like to live there? And, of course, how would it affect cities around the world?

Special thanks to Drs. James Alleman and Alenka Poplin at Iowa State University for their assistance.

Walt Disney and the Quest for Community, Steve Mannheim

Dream It! Do It!: My Half-Century Creating Disney’s Magic Kingdoms, Marty Sklar