Masdar City has a number of initiatives aimed at improving its environmental and economic sustainability. One of the largest, and perhaps most effective, are its building requirements: all are expected to reduce energy demand by 40 percent from average, water demand by 30 percent, and to achieve at least a 3 Pearl rating from the Estidama Pearl Rating System (roughly LEED Gold, an exceptional standard of efficiency). This, and the innovation culture inherent in Masdar, has resulted in a number of unique design choices.

The headquarters of the International Renewable Energy Agency is, as one would expect, one of the most efficient buildings in Masdar. The first Estidama Four Pearl building is the most sustainable building in the United Arab Emirates, and has won a number of international green building awards. The roof features 1,000 m2 of solar panels and it uses 42% less energy than the global efficiency standard. The building’s design creates careful shading to keep it cool and features large open atriums designed to mimic outdoor space. The materials used come from local low-carbon production and include recycled steel and aluminum.

Built as a partnership between Siemens Real Estate and Masdar City itself, this is the first building in Abu Dhabi to be certified LEED Platinum. It acts as modular office space, featuring adjustable office floor plates, and has won a handful of awards for excellence in office space. Each office has natural light from the atriums throughout the building while the outer shell of precision engineered lightweight aluminum shades the highly insulated inner building.

A different sort of office space, the Incubator Building is designed to benefit start-ups. It is immediately adjacent to the Masdar Institute, and its exterior mimics the Institute buildings while maintaining a distinct appearance. The red color comes from ceramic frits in the windows which filter light while minimizing heat. The banked sides of the building maximizes pedestrian pathways while minimizing sunlight, in opposition to typical big city setbacks that allow light in. The Masdar Institute of Science and Technology occupies a large portion of Masdar City’s current buildings, and most of its buildings feature waving red concrete facades. These serve as insulation, and the alternating waves allow the building to shade itself. The screens mimic historic mashrabiya lattice designs to allow in light while maximizing cooling potential.

The Institute’s Knowledge Centre is perhaps the most unusual building in Masdar City. The shell-like structure shades an open atrium and glass front. The triangular outcroppings at one end serve as shading for windows and to maximize solar panel surface. The roof beneath the shell is made of glue laminated timber, lowering its environmental impact.

Other Points of Interest

Aside from a play area and a handful of public art, Masdar Park features solar-powered restaurants built inside of recycled shipping containers. 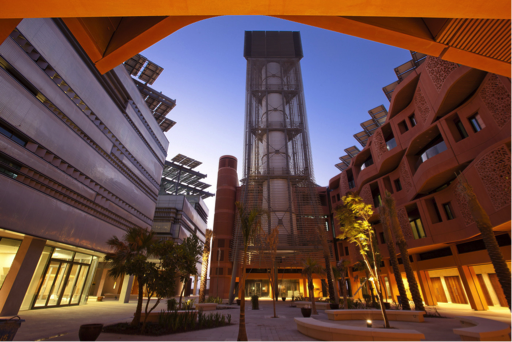 The wind tower at the center of the Masdar Institute campus uses a modern perfection of ancient technology to funnel cooler air from above the city into the plaza below it, creating a cooling breeze through the narrow streets nearby. It also features LED lights that change color based on current energy usage: green for when the city is meeting targets, red for when it goes over.