With everyone in the group finally landed, we started the real program off with a busy Monday. After breakfast, we made our way to the Vienna University of Technology (TU Wien) to meet with Drs. Ioannis Giannopoulos, Gerhard Navratil, and Paolo Fogliaroni at the Spatial HCI (Human Computer Interaction) Lab, where their group studies how humans can interact with spatial data, from large-scale geoinformation to individual building models, using emerging technology. This means using Augmented and Virtual Reality to study how people interact with space, as well as exploring new techniques of data visualization and functional uses for this technology. Of course, we got to try out a few of their systems.

First, a few students got the chance to try out their newly set up HTC Vive, traveling around Google Earth VR. Such a system can control experiments by standardizing otherwise shifting places while still simulating interactions with an immersive 3D environment. Planned experiments include studying how to identify and best provide services to people with varying knowledge of a place.

We then moved on to the AR lab, which was equipped with a set of Meta goggles (imagine Google Glass on steroids). Here, students (including yours truly) interacted with a number of programs, including a tutorial about interacting with the holographic objects in front of us, a handful of laser scanned terrains which could be interacted with and explored in 3D space, and a data visualization concept with selecting points in a cube. One program that they unfortunately couldn’t run for us was more functional, manipulating models of apartment buildings to compare rooms in three dimensions.

Finally, we got the chance to participate in an experiment with a Microsoft HoloLens, the only portable system there. Using the lens, we were able to view a holographic underground pipe superimposed on the actual floor, where we estimated the depth of the pipe. Such a system could one day be used for inspecting gas lines with “sniffers,” eliminating the need for checking maps.

After wrapping up in the HCI Lab, we met with Manfred Schrenk, managing director of the Competence Center of Urban and Regional Planning, who presented on defining Smart Cities. He emphasized the importance of “Real Emotional Cities,” focused on quality of life, sustainability, resilience and social aspects, with a strong vision, all before worrying about technology.

We next met with Mag. Birgit Ginzler, Head of Communications for the Smart City Agency at Urban Innovation Vienna, a public company that helps coordinate the Smart City Wien program. We discussed the minimal ticket control on the subway (she explained it had always been that way, and that most people buy annual passes at €365/year), the Smart City Wien plan (which is in fact legally binding), and gaps in communication (some of my fellow travelers met people who had no idea that Vienna was a Smart City). Some of the projects she emphasized included Aspern, Smarter Together, DigitalCity.Wien, the Sag’s Wien App, and WAALTeR.

Our final educational stop was an exhibit at the Architekturzentrum Wien Museum about architect and urban planner Dennis Scott Brown, known for studying the existing urbanism in Las Vegas when that was verboten, as well as emphasizing generalist functionalism and early postmodernism. 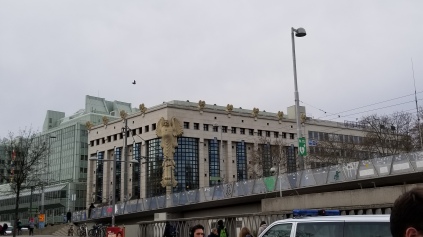 The library at TU Wien. 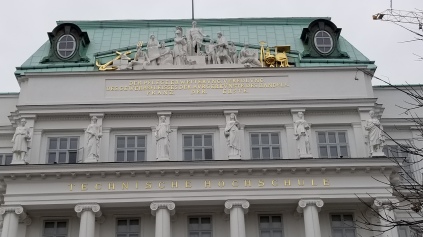 The original building on the TU Wien campus. 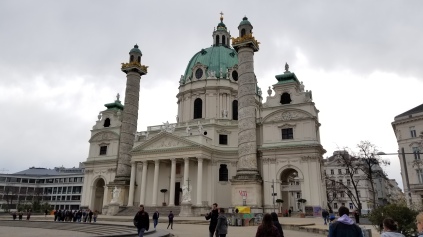 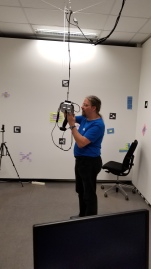 Dr. Gerhard Navratil prepares the Meta AR goggles for use. 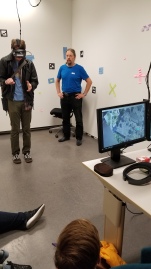 I manipulate some laser scan models in augmented reality.

Jason Becker tries out some hand motions to manipulate data in augmented reality.

An afternoon snack of sachertorte at the Cafe Mozart.

A busker in the Vienna subway. Busking is regulated, with buskers auditioning for 90 minutes spots in the busiest stations.

“All You Can Lose,” a public art piece by Deborah Sengl in the MQ Art Box in the MuseumQuartier.

Prof. Alenka Poplin poses in front of a monument featuring her and our Vienna guide Christian Eizinger at the Denise Scott Brown Exhibit.