About 110 km north of Phoenix, Arizona, in the middle of a semi-arid desert, you’ll find an odd sight: a community of rough concrete buildings sitting on a mesa. Inside, brass and ceramic wind-bells are cast and sold, construction on the development continues, and, in theory, all the needs of a modern city are met with minimal environmental impact. This is Arcosanti, the brainchild of Paolo Soleri, built to prove his vision of architecture and ecology working hand in hand.

Paolo Soleri: The Man Behind the Plan

Paolo Soleri, born in 1919, was an Italian architect and philosopher. He gained attention while working in a fellowship with Frank Lloyd Wright in the late 1940s, when Elizabeth Mock featured his Beast Bridge design in The Architecture of Bridges, published by the Museum of Modern Art. In 1950, Soleri designed a ceramics factory in Italy, learning about the art of pottery and beginning to design the wind-bells that would be a defining feature of his masterpiece.

In 1956, Soleri moved to Scottsdale, Arizona and founded the Cosanti Foundation, combining the Italian words “cosa” and “anti,” literally “before things.” The Foundation manages his work to this day. Thanks to them, Soleri’s ideas have continued to grow beyond his death in 2013.

It is worth noting here that, in 2017, Paolo Soleri’s daughter, Daniela, published an article on Medium charging her father with repeatedly sexually abusing her. You can read her story here and the Cosanti Foundation response here. I largely agree with the Foundation’s response, in that while the legacy of the man must be deeply reconsidered – and likely discarded altogether – it is also possible to consider his ideas separately.

Paolo Soleri’s ideal of “arcology” is a portmanteau of “architecture” and “ecology.” It took its earliest form in the Mesa City Project, a theoretical community of 2 million people that he designed from 1958 to 1967. Mesa City contained many of the elements that would come to define Soleri’s later “arcologies.” The plan was extremely compact and three-dimensional, with huge structures reaching upward and into the ground to fit more into less space, with complex mixed uses and a creativity-based commercial sector.

Soleri summarized his vision in Arcology: The City in the Image of Man, published in 1969. He couches a delicate mixture of architecture, urban design, environmentalism, philosophy, and spiritualism in the language of biology. Arcology, Soleri argues, is the evolution of the city and thus follows certain evolutionary imperatives.

First among these is complexity: The city must cluster many processes and events. From that comes miniaturization: A city, like many organisms, must become more compact to maximize the efficient use of resources, space, and time. Arcologies, therefore, must undergo “urban implosion,” collapsing cities into small spaces – even into a single massive building. This is perhaps the key imperative – Arcology opens with a full page dedicated to the single sentence “This book is about miniaturization.” Soleri’s paradigm is completed with “duration,” which he believes is the end goal of cities and of life – a stretching of time until, eventually, one is “living outside of time.” The results of these design choices, Soleri claims, are more lively human habits that will accelerate biological, human, and social evolution.

The design for Stonebow, an arcology built into a cliff face. Author’s scan from Arcology: The City in the Image of Man 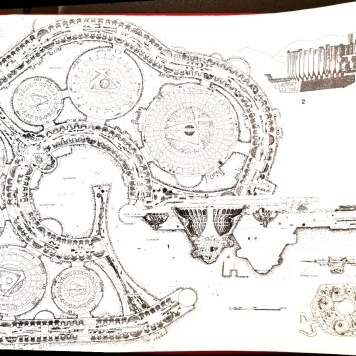 The design for Novanoah II, a floating arcology on the continental shelf or open sea. Author’s scan from Arcology: The City in the Image of Man

The design for Hexahedron, an arcology for any environment. Author’s scan from Arcology: The City in the Image of Man

The design for Asteromo, an arcology in space. Author’s scan from Arcology: The City in the Image of Man

Arcology also includes a series of proposed designs, ranging from ideas perhaps only a few years away from realization to ones straight out of science fiction – Stonebow, built into a cliff face to house 200,000 people; Hexahedron, home for 170,000 in any environment; Novanoah II, a floating city for 2.4 million; Asteromo, housing 70,000 people in space; and many more. Soleri continued to design arcologies for the rest of his life.

As time passed, the concept of arcology evolved, most notably with an increased focus on renewable energy and self-sufficiency after the energy crises of the 1970s. Today, the Cosanti Foundation defines arcology with six key traits:

In 1970, Soleri began work on his plan’s proof: Arcosanti. Designed as an urban lab to prove the viability of arcology, the planned community aims to accommodate 5,000 people on 15 acres – 10 times the density of New York City­ – at the center of an 860-acre nature preserve. More than 7,000 volunteers have built the city, using Soleri’s earth-casting technique to shape concrete in forms dug out of the ground.

However, Arcosanti isn’t yet what Soleri envisioned. Nearly 50 years after it began, the city has only 13 finished buildings and is home to only about 60 permanent residents – down from a hundred in 2003. Around 30,000 people visit each year, but most are tourists passing through for a tour or stopping for a short workshop in bell-making or photography. More eco-village than eco-city, Arcosanti is far from reflecting the huge, dense three-dimensional vision of its original designs. The community, while architecturally beautiful, has yet to prove Soleri’s thesis.

Despite Arcosanti’s slow development, many cities – smart and otherwise – are incorporating elements of its founding philosophy. Detroit, as it shrinks, has begun to move agriculture back into the city. Masdar City, despite its flaws, has described itself as an arcology. Vienna has moved to incorporate passive climate control and other ecological architecture into its smart city plans.

Why has it taken so long and why are these moves so piecemeal? We may need to step back and consider the same biological processes Soleri claims make these changes necessary. Evolution is slow, unpredictable, and complex. Cities, like organisms, generally develop adaptations grudgingly, near-randomly, and only when clearly beneficial to survival. The rapid, radical change Soleri insisted was necessary cannot happen without a sudden shift in the priorities of governments, planners, and people, and even then may not prove better for cities. After all, the only experimental evidence for a full arcology is still incomplete in the Arizona desert. When Soleri insisted that small improvements would produce only a “better kind of wrongness,” he failed to recognize that all evolution has been small improvements towards better and better kinds of wrongness.

One thought on “Arcology, Arcosanti, and Paolo Soleri’s Evolution of Cities”